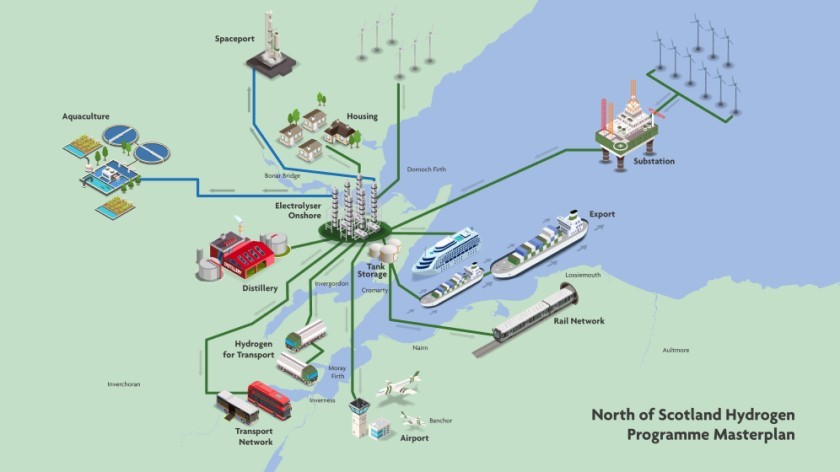 SHFCA members ScottishPower and Storegga have announced their green hydrogen partnership to transform industry in the Highlands, with plans to build a series of green hydrogen projects. The initial project phases will be focused in the Cromarty Firth region, just north of Inverness, and will provide green industrial heat across the region for a range of customers including distilleries and transportation sectors.

This partnership between ScottishPower and Storegga will develop, build and operate green hydrogen production plants across Scotland – with the potential to transform industry and transportation in the Highland region. The projects are expected to deliver hundreds of MW of green hydrogen production capacity before end of the decade, with plans for the first project to be operating by 2024.

The first project to be progressed will be the Cromarty Hydrogen Project, located just north of Inverness. The project is designed to deliver up to 20 tonnes of green hydrogen per day from 2024 and has, subject to customer demand, the potential to scale to 300MW in a series of modular expansion phases. It will displace existing fossil fuel sources and enable the supply of green hydrogen into the heating processes of distilleries, with additional potential application to other local manufacturing, food production, and industrial heating applications.

The Cromarty Hydrogen Project follows a successful feasibility study by ScottishPower and Storegga, undertaken in collaboration with major distillers Diageo, Glenmorangie, and Whyte & Mackay – all of which have operations in the Cromarty region. As part of meeting ambitious carbon reduction targets set by one of Scotland’s most valuable exporting sectors, the use of green hydrogen will decarbonise production processes, helping make Scotland’s national drink greener. Discussions on similar projects for other customers and industries are also underway.

Barry Carruthers, Hydrogen Director at ScottishPower said: “This is a really exciting milestone in our ambitions to support the growth of green hydrogen production across the country and the decarbonisation of heavy industry. We can now get to work on turning plans on paper into tangible and deliverable projects that will transform industry in the Highlands – making a long and lasting difference for people, businesses and communities. We’re excited to be working with Storegga to help create a clean energy future for this stunning and vital economic region of Scotland.”

Andrew Brown, Head of Hydrogen at Storegga added: “The Cromarty Green Hydrogen Project is expected to be the UK’s largest green hydrogen facility when it commences operations in 2024, and is expected to rapidly expand thereafter. Storegga has been working with the distilling sector on the energy transition since 2014. In 2019, the Scotch Whisky Association’s Pathway to Net Zero report identified that hydrogen would play a key role in enabling Net Zero for the distilling sector. Phase 1 of the Cromarty Hydrogen Project is expected to be the first of many as we develop a broader green hydrogen manufacturing capacity in Scotland this decade. Storegga is proud to be working with ScottishPower and the distillers on this groundbreaking project.”

Locally produced green hydrogen has clear benefits in terms of security of energy supply. As well as accelerating the potential for cleaner industrial heating processes, green hydrogen is poised to transform the heavy transport sector across the country, with clean fuel potentially powering vehicles such as refuse collection trucks, buses, and HGVs. Green hydrogen is also a suitable alternative clean fuel for rail, air and shipping.