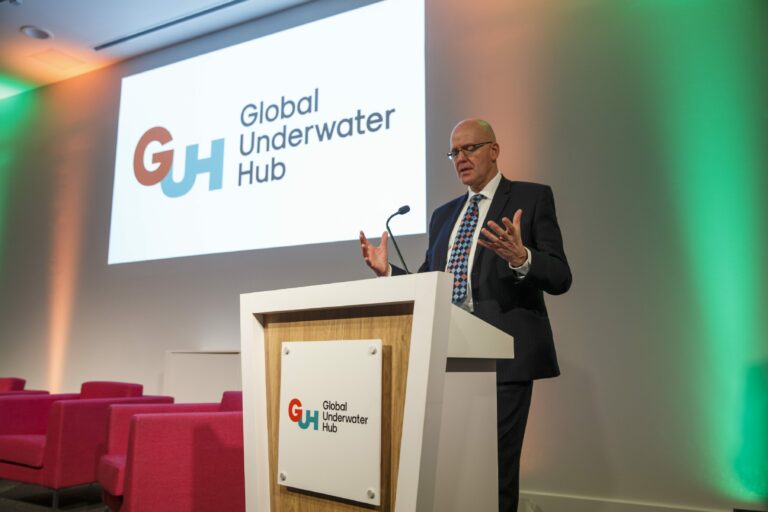 According to a white paper published by the organisation, an “unprecedented scale of opportunity” lays before the underwater sector, which could balloon to £45 billion by 2035, up from £8bn today.

In doing so it has the scope to create as many as 180,000 new jobs and around £20bn or more generated in exports.

After announcing plans for the GUH last year, the strategic organisation officially launches today at Subsea Expo – the event got underway in Aberdeen on Tuesday.

Born out of Subsea UK, it has been established to ensure the industry delivers on one of the biggest opportunities for revenue generation and green job creation.

Moreover the body will work to support and accelerate growth, helping the UK underwater sector to capitalise on £140bn worth of opportunities in the global blue economy by 2035.

Led and governed by industry, the GUH has been backed by £13 million from the Scottish and UK Governments.

Mr Gordon said: “The exponential growth of the blue economy presents an unprecedented scale of opportunity on which the UK’s world-renowned underwater industry can capitalise.

“As the industry emerges from the uncertain and challenging pandemic period with a degree of optimism fuelled by opportunities in the energy transition and blue economy, the GUH will provide the specific market intelligence and support to help companies make informed decisions on which markets and sectors to target to deliver a step-change in growth.”

The official launch of the GUH comes as the subsea industry readies itself to cash in on the energy transition.

A recent survey of the sector by the organisation revealed that almost 90% of subsea companies expect to recruit in the next 12 months.

Moreover the study suggested that 8,000 additional jobs could emerge over the next three years.

And with the potential for tens of thousands more to be created by 2035, the underwater industry faces a challenge to attract workers at the levels needed to meet demand.

Mr Gordon said: “This is a long term industry; we’re talking about underwater careers in science, engineering andtechnology. The oceans bring us so much and we are going to have to harness them in many ways.

“It is an exciting industry when we think about attracting young blood into it, and because of the focus around climate change and protecting our oceans, we want to attract the best environmental scientists. We want to develop and manage resources and we want to do that sensitively.

“Coming into the blue economy gives scope for someone to move and work in different sectors around the world.”

Excitingly for the underwater industry, after years of promise the energy transition in the UK is now ramping up quickly.

Carbon capture and storage (CCS) projects are starting to take shape, and many oil and gas companies are making moves into green hydrogen.

Moreover the results of the ScotWind offshore wind leasing round were released last month, following on from the equivalent process in England and Wales last year.

Significantly for the subsea sector, floating wind, which Mr Gordon touted as the “bigger prize”, dominated the projects picked by Crown Estate Scotland.

Many of the cable and mooring solutions needed for floating turbines have been in use in the oil and as sector for years, giving the industry a unique leg-up.

Mr Gordon added: “Already expanding on a global level, with multi-billion opportunities in emerging sectors where skills and technology are eminently transferable, such as floating offshore wind, wave and tidal energy, CCUS and hydrogen, the industry is also buoyed by the growth potential in aquaculture, oceanology, defence and the continuing evolution of the oil and gas sector.

“Unleashing this potential requires addressing the challenges facing the industry, not least of which is the increasing competition from other countries. Given the scale of the opportunity, Norway, France, Canada, Japan and Brazil are investing heavily in challenging the UK’s competitiveness with significant public sector intervention and investment.

“The UK’s current position can be strengthened by bringing together existing skills and knowledge to develop technology and services for use in multiple sectors. As the single authoritative body for the underwater industry, the GUH will provide the necessary leadership and strategic direction in navigating the future landscape of its market sectors.”

By harnessing, promoting and supporting all branches of the industry, the GUH has pledged to deliver a step-change in the development and internationalisation of underwater technologies and services.

As part of this objective the organisation will promote greater cross-sector collaboration and fast-track service and technological innovation to solve an array of challenges.

“This will cement and grow the UK’s world-leading reputation, positioning the UK as a centre of underwater excellence globally and attracting inward investment,” said Mr Gordon.

The GUH will also gather commercially focused market insight to give companies clear routes to market and to inform strategic decision-making.

Through specialist support, it aims to help firms scale-up, accelerate their growth and work across the supply chain.

The GUH currently has a total workforce of 15 staff based in Aberdeen, with plans to double that figure across the organisation.

Two further hubs in the south and north of England are due to be launched in the next year.

By expanding its footprint the body can ensure that specialist support is available the length and breadth of the UK.

Mr Gordon added: “The GUH will play a pivotal role in delivering transformational change and exponential growth in this highly important industry. Unlocking the depth of opportunity under the oceans is key to meeting the long-term shift towards a low carbon society and sustainable use of the oceans’ resources and, in turn, to creating significant additional revenues, jobs, technology and exports for the UK.”

Read the story on the Energy Voice website here.