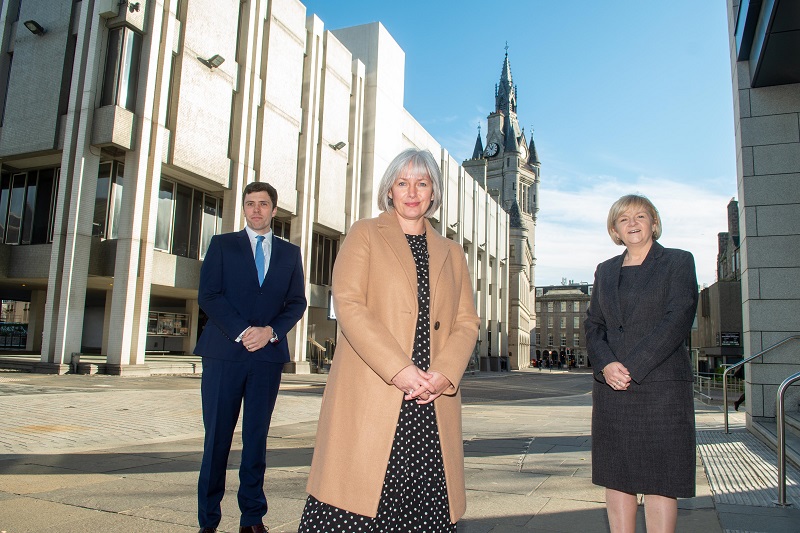 An international energy company has been approved to be the Joint Venture partner to deliver the ambitious Aberdeen Hydrogen Hub which will build a solar power facility connected to a green hydrogen production and refuelling facility.

Aberdeen City Council’s city growth and resources committee today agreed the move which was hailed as transformative by the Council Leader by furthering work for the city’s energy transition on the route to net zero.

City growth and resources convener Councillor Ryan Houghton said: “I am incredibly proud of this next step Aberdeen is making with our commercial partner bp, which has advised the council on the delivery of our Energy Transition Strategic Infrastructure Plan and this exciting announcement builds on that work.

“We’re proud that hydrogen is already here in Aberdeen and this significant commercial partnership with bp is set to support our ambitions. We plan to create a blueprint which can be replicated around the world by the cities and regions looking to reach net zero. Aberdeen’s position as a leader in the energy industry requires ongoing investment and partnership and the Hydrogen Hub is a fantastic example.”

Council Leader, Councillor Jenny Laing said: “This is a huge announcement for Aberdeen as it supports the delivery of our Net Zero Vision and paves the way for the city to be a world leader in the production of hydrogen-based green fuel and energy.

“It will help create a cleaner, more sustainable city for local people and it also provides us with the opportunity to create hundreds of skilled jobs and add millions to the Aberdeen economy. Aberdeen has a worldwide reputation as a pioneering hydrogen city and by working in partnership with bp, we intend to put Aberdeen at the forefront of the green economic recovery.”

Louise Kingham, bp’s UK head of country and senior vice president for Europe, said: “bp is committed to providing integrated energy solutions to help cities and corporations decarbonise and this hydrogen hub proposal can help do just that.

“We look forward to working with the local authority to deliver this exciting project, drawing on the skills and expertise of our people and their vast experience delivering complex energy projects.

“This milestone comes a matter of days after bp and our partner EnBW were named among successful bidders in the ScotWind offshore wind leading round and further demonstrates the leading role bp can play in Scotland’s energy transition.”

Following a robust tender process which started last June (2021), the Aberdeen Hydrogen Hub concept will enable the continued development of a hydrogen economy in the city.

Aberdeen City Council embarked upon its hydrogen journey more than 10 years ago and has already demonstrated how demand can be created within cities, using the zero emission fuel to power a fleet of 25 buses, 60 public sector vehicles and waste trucks, as well as the P&J Live events, conference, and entertainments complex.

More than two million passengers have travelled on the city’s hydrogen buses, and CO2 savings to date are in excess of 100 tonnes over the last six years.

A report to committee said the Hydrogen Hub came about after Aberdeen City Council, in partnership with Opportunity North East (ONE) and Scottish Enterprise (SE), appointed Element Energy in 2019 to review the business case for the hydrogen sector in Aberdeen following successful pilot projects – including the Aberdeen hydrogen bus project and council fleet deployment.

The report concluded that collating hydrogen demand across fleets, increasing production and supply of green hydrogen by connecting to large scale renewable generators, and coordinating supply chain and training could lower the price of hydrogen and catalyse use by other growth sectors seeking to decarbonise (heat, industry, maritime, rail etc).

This concept of a commercial hydrogen production, storage and distribution facility in Aberdeen powered by renewable energy, with associated training and supply chain support to facilitate uptake by fleet, heat, industry, export etc. has become known as the AHH.

The report said it is envisaged that the AHH will be developed in three phases in response to growing demands for hydrogen:

In June 2020, the Hydrogen Hub concept was adopted into the City Council’s Energy Transition and Strategic Infrastructure Plans as part of a net zero vision. The vison for the AHH aligns with the UK Government’s recent UK Hydrogen Strategy publication which sets out the approach to develop a thriving low carbon hydrogen sector in the UK with an ambition to generate 5GW of renewable and low carbon hydrogen by 2030 and the Scottish Government’s Hydrogen Policy Statement and Draft Hydrogen Action Plan, which both pitch Scotland to become a leading hydrogen nation in the production of reliable, competitive, sustainable hydrogen.