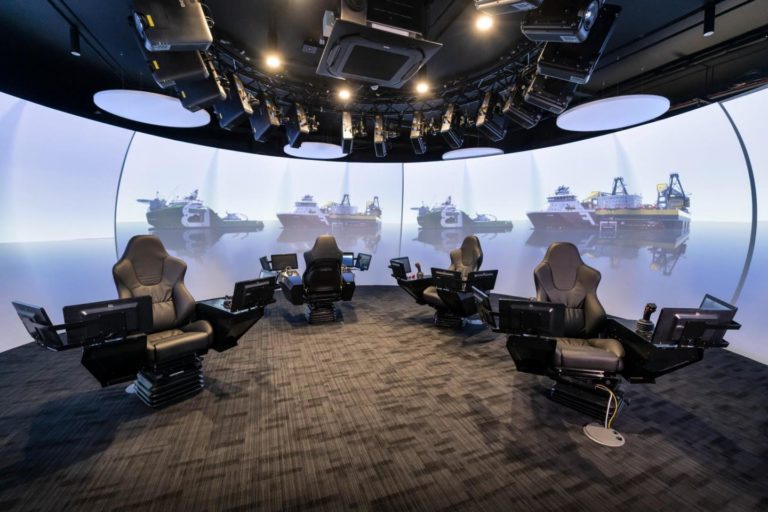 A £1.6million simulator has been unveiled which is expected to “transform” the way oil platforms are decommissioned and new energy projects are installed in the North Sea.

The National Decommissioning Centre in Newburgh, a joint project between Aberdeen University and the Net Zero Technology Centre (NZTC), has launched the simulator suite which will help cut costs and emissions as project activity ramps up.

North Sea decommissioning spend is estimated in the region of £15billion over the next decade, with the simulator able to replicate conditions and virtually test out and de-risk new technologies.

Tasks like removal of subsea infrastructure or installation of floating offshore wind can be replicated using visualisation and advanced data modelling, while bringing in the weather conditions and tidal patterns of the North Sea.

The simulator has been funded through the Scottish and UK Governments, as well as via the Aberdeen City Region Deal through the NZTC.

Professor George Boyne, principal of Aberdeen University, said: “Along with our partners in the Net Zero Technology Centre we are committed to establishing the NDC as a as a global leader in research and development, building on this region’s strong track record in innovation in industry and the sciences.

“The arrival of this state-of-the art simulation suite is testament to that ambition, and to our commitment in promoting economic recovery for our region by working in partnership with industry on projects related to decommissioning and the energy transition.”

The first fully funded project is not decommissioning but a project to support offshore wind installation being carried out in connection with Ellon-based Aubin Group.

The aim is to bring in operators and members of the supply chain to utilise the facility for their project activity, with the search underway for potential private sector partners.

Scottish Net Zero minister Michael Matheson launched the simulator earlier, saying the innovation has “never been more important as we look to showcase Scotland to the world in COP26” in November.

The simulator suite is also being used as part of the “Smart Basin” project from the NZTC, based on the established “Smart City” concept for urban areas.

Starting with the east Shetland basin, the ultimate aim is to map out the entirety of infrastructure North Sea to tackle costs and greenhouse gas emissions linked to decommissioning projects.

NDC staff have already tested this through a model of Aberdeen whereby key data can be superimposed onto this new project.

Myrtle Dawes, solutions centre director at the NZTC, said: “The simulator is an important addition to the National Decommissioning Centre and will be a valuable resource for industry to establish the viability of future decommissioning and energy transition projects through scenario planning and data science.”

The Scottish Government is supporting the NZTC-led Data for Net Zero project (D4NZ), which is aimed at delivering a range of benefits to companies and other stakeholders in the North Sea.

Ms Dawes added: “With data science, visualisation and computer modelling at its core, the D4NZ project will utilise the centre’s simulator to power forward a reimagined offshore energy system enabled by data sharing and evidence-based decision-making.”