From Granite City to a global hub for hydrogen 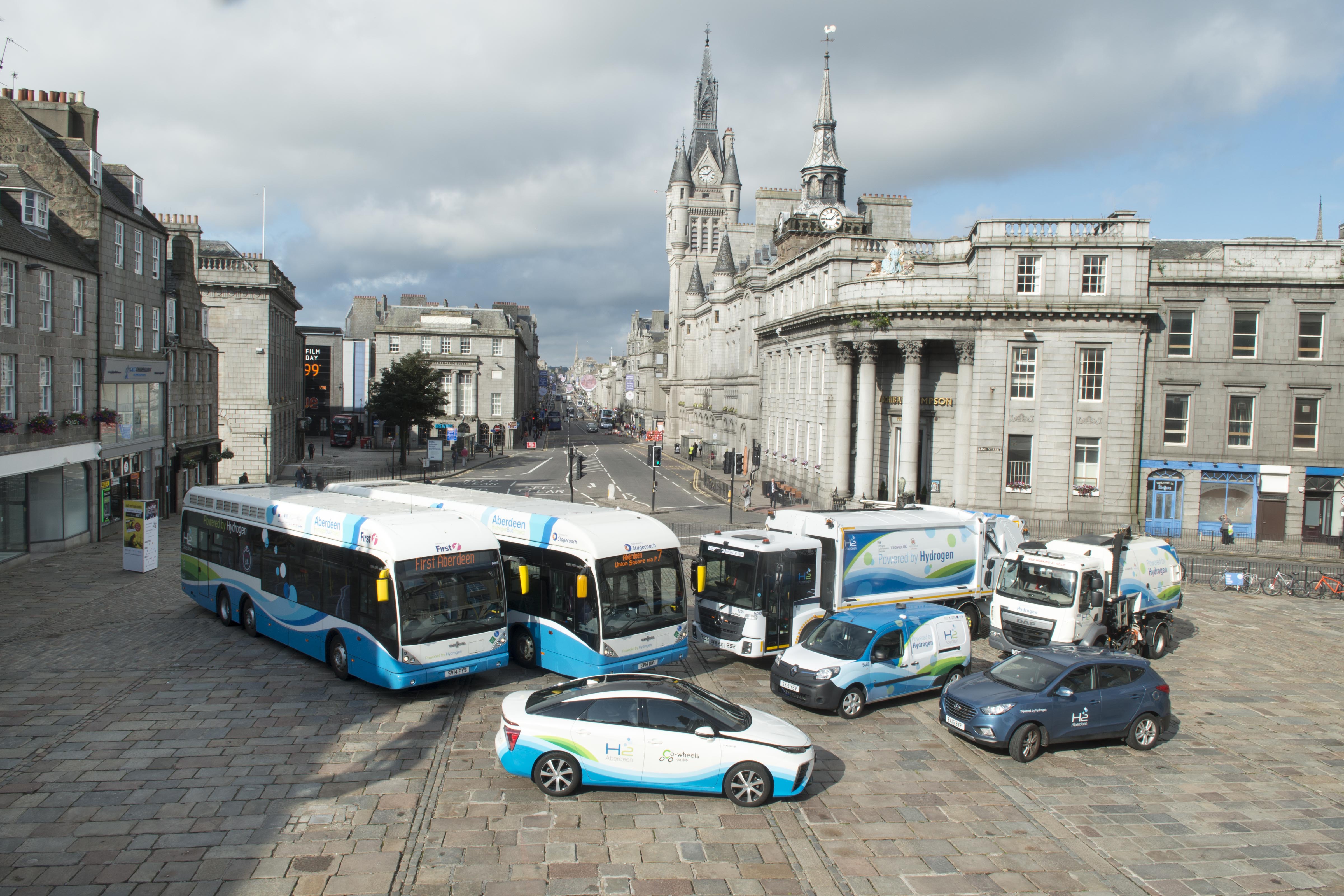 With the largest fleet of hydrogen buses in Europe and the UK’s first integrated hydrogen generation and bus refuelling station, Aberdeen is at the forefront of several exciting hydrogen projects.

As part of a drive to showcase these projects, to network and to further explore hydrogen opportunities in the North East, the city welcomed around 700 delegates to the inaugural Aberdeen Hydrogen Festival.  The festival attracted international delegations across Europe and the United States. It was a great success, with all participants speaking very highly of Aberdeen and its status as a hydrogen leader.

To mark the start of the festival, the world’s first hydrogen-powered vessel paid a visit to Aberdeen Harbour. The Energy Observer is a converted race boat and the first of its type in the world to convert seawater onboard for use as hydrogen fuel. The vessel is set to visit a further 50 countries on its mission to promote sustainable transport and the reduction of carbon emissions.

Fuelling the hydrogen revolution through collaboration

The Hydrogen Festival’s programme of events began with a one-day conference on October 1. The event was co-hosted by Aberdeen City Council, in conjunction with Pale Blue Dot Energy and ERM and with additional support from Opportunity North East, Scottish Enterprise and the Oil and Gas Technology Centre.

At the conference, Equinor shared its experience of H21, a hydrogen gas project Northern England where as much as twenty percent of hydrogen will be mixed with domestic gas in standard gas boilers to decarbonise heating. In another session, Andrew Win, programmes and project manager at Aberdeen City Council discussed the council’s Hydrogen Valley concept. Presentations were also made by the department for Business, Energy & Industrial Strategy, Scottish Enterprise, The Oil & Gas Authority, The Crown Estate and Scottish Gas Networks.

Demonstrating the importance of Aberdeen to the burgeoning Scottish hydrogen landscape, the Scottish Hydrogen and Fuel Cell Association (SHFCA) also brought its conference to festival. The conference explored the role of hydrogen and fuel cell technologies in delivering key ambitions for a low carbon future. Kiwa’s Martin Crowther spoke about integrating different renewable types with hydrogen and Lorna Archer from Scottish Gas Networks spoke about heating Scotland with renewable energy. Team PrototAU, the University of Aberdeen Shell Eco-marathon team, showcased its hydrogen vehicle which was designed and built by students.

In association with the European Marine Energy Centre, the Institute of Gas Innovation and Technology at Stony Brook University and SHFCA, the TAP2G Trans-Atlantic Power to Gas Workshop was held across two days. The seminar brought together industry experts from Europe and the USA to identify common areas of interest as well as share opportunities for transatlantic collaboration.

Liquid ammonia was noted to be the upcoming energy vector of choice for large ship propulsion and grid scale energy storage. In another session, Siemen’s director of strategy and government highlighted that all the electric race cars at this year’s Goodwood Festival were recharged from a hydrogen fuel cell arrangement.

One of the conclusions from the seminar was that in order to decarbonise Europe in alignment with the Paris Accord timescale, 30GW of power-to-gas would be required.  This is the equivalent of nine Hinkley C atomic power stations generating useable hydrogen as the fuel of the future.

The Hydrogen Festival demonstrated the market readiness of hydrogen as well as giving Aberdeen an opportunity to strengthen its position as a pioneering city for hydrogen development and technology. There was a definite cross-sectoral interest in hydrogen with uses being cited for the oil and gas industry, the wave industry, transport, domestic heating and also new materials development.

As Councillor Philip Bell, my fellow AREG board member and the Council’s hydrogen spokesperson said: “The Hydrogen Festival was an inspiring week, as we welcomed delegates from near and far. This region has a track record as an energy industry innovator and the festival provided a platform for Aberdeen to lead from the front as hydrogen opens up new possibilities.”

With so many opportunities locally, I forward to engaging with our members to discuss how AREG can help with harnessing hydrogen technology to realise and secure a low carbon future.