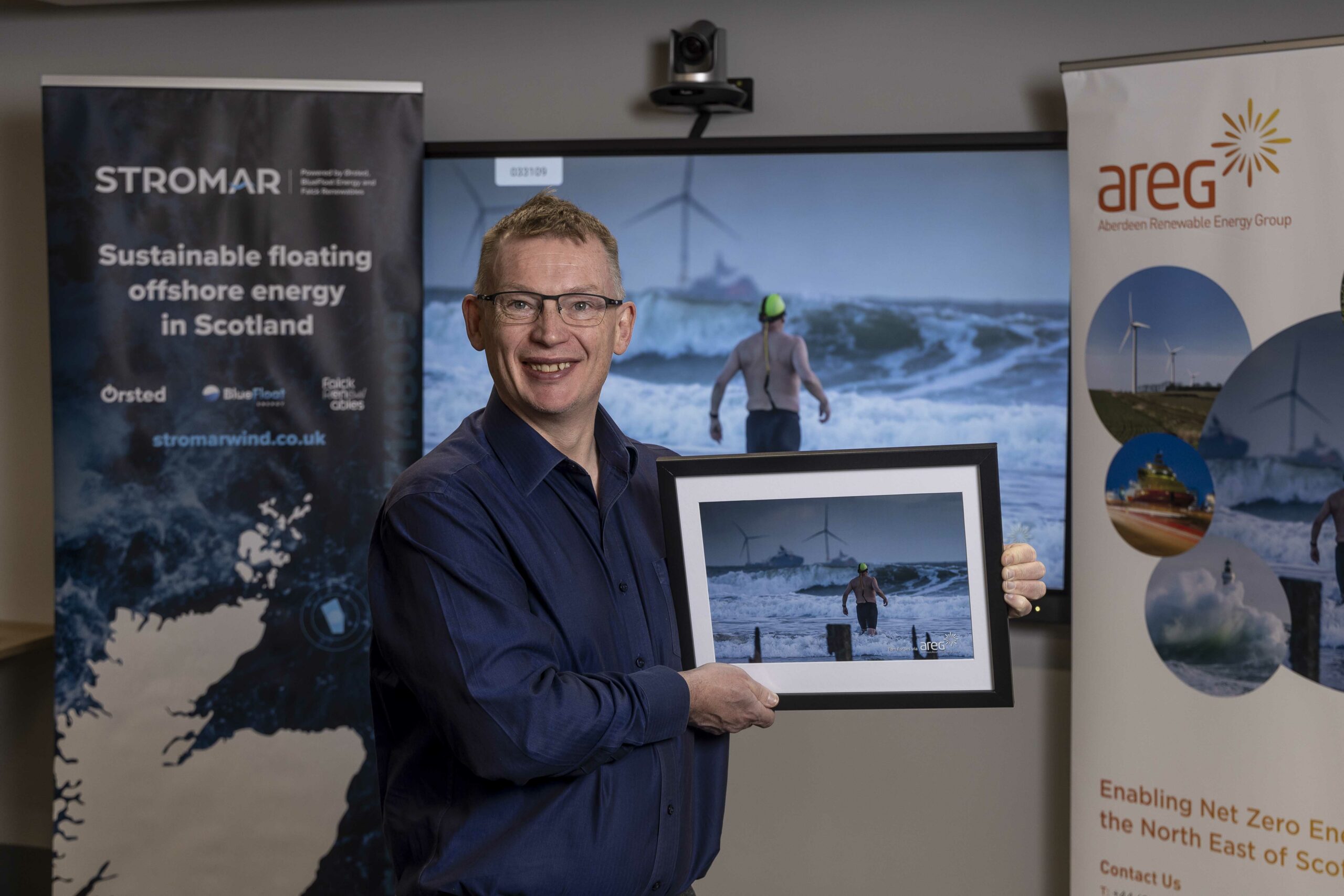 The winning image, taken by Tom Forbes, shows a swimmer entering the water at Aberdeen Beach against a backdrop of Aberdeen Wind Farm and offshore industry supply vessels. The photograph, which won the top prize of £200, will feature as the January image for AREG’s 2023 calendar.

Mr Forbes, who is a keen amateur photographer and works for an energy company in Aberdeen, explained how the winning photo came about.

“I finally joined a local camera club at the start of lockdown where one of my colleagues is also a member. In January last year, we headed down to the beach hoping to get some nice shots with surfers and there was a gentleman about to go into the water for a wild swim. From where I was standing, he lined up perfectly with the wooden groynes, so I framed him between these and the waves.

“It was only when I looked afterward that I noticed the wind farm and supply vessels in the background too. When the AREG competition came about, I thought the image signified everything the renewable energy industry represents in Aberdeen as well as our heritage in oil and gas. I didn’t expect to win so it was a nice surprise.”

Twelve runners-up, who will each receive a prize of £50, will also have their images featured in the calendar.

The competition, sponsored by floating offshore wind project Stromar, invited photographers to submit pictures that reflect the changing energy mix and the environmental challenges that are impacting our communities and the planet. This year’s submissions included images of offshore wind, solar power and the power of nature.

Nicholas Ritchie, Stromar project director, said: “We were delighted to sponsor the competition which perfectly captures what the energy transition looks like in real life.  The stunning winning images really highlight that renewable energy is not only vital for a secure carbon-free future, it can also fit in with the surrounding environment and very quickly become part of daily life.”

The winner of the competition was announced during a breakfast event at Aberdeen Science Centre where the 13 winning images will be displayed for the next year.

Jean Morrison, AREG Chairperson, said: “We would like to congratulate Tom on his winning entry and thank everyone who took the time to submit a photograph for our annual calendar competition. Once again, we had a great selection to choose from and that never makes it easy for the judges.

“As one of the original energy transition organisations in the North-east, it’s our mission to be a powerful voice in the net zero conversation, at home and overseas, and announcing the winner of the photography competition a month after our inaugural Energy Futures conference feels like a fitting way to end a successful year.”